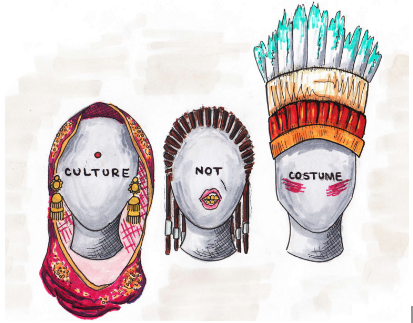 Recently costume supply staples, such as Party City, as well as the consumers themselves are promoting costumes that many deem as cultural appropriation. These exploitive costumes have received backlash in the media and the controversy continues as to where to draw the line when it comes to costumes.

Cultural appropriation is the adoption of certain elements of a culture, usually for an aesthetic.

The problem lays when one takes from another culture, and passes it as their own in an offensive and exploitative manner. Many would argue that the end of October is the peak season for cultural appropriation, because costume wearers blur the line as to what is seen as an appropriate costume.

A costume is defined as “a style of dress, including accessories and hairdos, especially that peculiar to a nation, region, group, or historical period” (www.dictionary.com). Therefore one could argue that it is reasonable to take on a different persona, because the intent of the tradition of wearing a costume is to become something or someone other than yourself. The question still remains as to when wearing a Halloween costume turns into disrespecting an entire culture.

People should try not to wear things that are associated with controversy. Halloween does give you the chance to become someone else for the night and have a few laughs but if you think your costume may upset someone, there are plenty of other costume choices out there. If you think that your costume is the slightest bit offence to someone’s culture, you probably shouldn’t be wearing it.

Many costume ideas for Halloween stem from movie characters, or other fiction personalities. These include Moana, Pocahontas, Princess Jasmine, and many others. Some people find that wearing these costumes are okay but only if you are cautious in your costume selection. But even then, dressing up as certain characters can make people, who have deep cultural connection to that character, feel extremely uncomfortable.

A simple search on costume supply giant, Party City’s website reveals costumes such as “Glamazon Warrior”, “Tribal Temptation Native American”, “Golden Cleopatra”, “Pilgrim Woman”, and “Sexy Day of the Dead Doll”. It is clear that these popular costumes target a wide range of cultures and offend the respective culture by turning their traditions into a gimmick.

One of the most common cultures borrowed from on Halloween is that of the Native Americans. By turning their traditional dressings which they hold to much respect into a “tribal temptation”, those that created and wear these costumes show great disrespect for the culture. They have turned the culture’s values into a joke, and attempt to pass off this costume with the gimmick of it being a way to lure men.

But Native American culture is not the only one that gets “borrowed” during the Halloween season. For example, there are many beautiful articles of South Asian culture, that have been rediscovered by Westerners for Halloween night. This includes henna designs, and bindis, which both hold immense meaning and hundred of years of tradition for South Asians. However, the number of cases in which people who do not know what they symbols mean, and merely wear them for the “aesthetic”, is on the rise. It’s one things to wear something that belongs to another culture, but it’s completely different thing to wear it and not even know what it stands for.

For years, people of Native American, Asian, African American, etc. have been attacked and criticized for their culture by people who never took the chance to understand it. After all these years of denounces these cultures,and condemning them for expressing their cultural heritage, people have began to pick them up and use them for their own personal advantage. As long as your number of Instagram likes goes up, who cares if you are completely disrespecting the culture and tradition of an entire race?

To avoid cultural appropriation, there is a easy solution: do not wear the costume. It’s easy to dress up and have a night of fun but ask yourself could I be offending someone with my costume? If there is hesitation, chances are you should probably change your “costume.”