The winter concert: A showcase for THHS talents 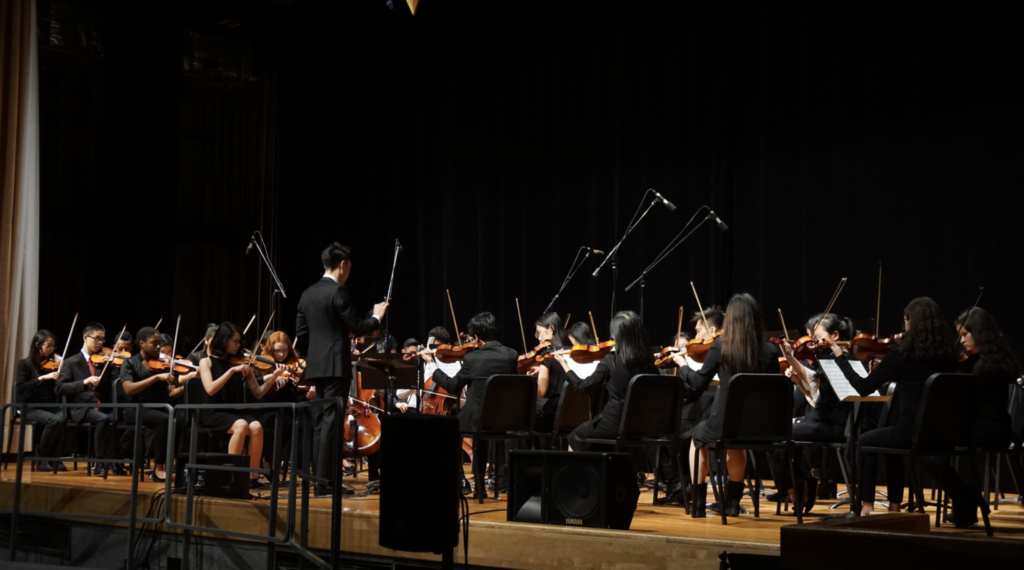 The annual winter concert took place on December 18, showcasing a collection of students’ musical talent and bringing a pleasant end to the fall semester.

The Jazz Ensemble opened the concert with their rendition of various holiday songs such as “Dashing Through The Snow” and “Frosty The Snowman.” This was followed by the chorus, from which vocalists Daniel Song and Deborah Kong sang “Miracles in December” by Korean pop group EXO in Korean, Chinese, and English. The orchestra concluded the concert with a performance featuring solos from junior Elizabeth Duchan and sophomore Michelle Stern.

A new addition to the winter concert was the collaboration among all of the music groups and staff in the finale: Handel’s “Hallelujah Chorus.”

“At first I just thought [the finale] was really cool, mainly because it was my first time attending the winter concert,” said sophomore Kelly Cheng. “But later on I found out that apparently that was the first time in school history that all three music groups performed on stage together, which really surprised me.”

“I felt the finale of the concert beautifully incorporated the orchestra and vocalists,” said chorus member junior Nylah Odom. “We all worked extremely hard to nail the notes included in our parts and harmonize together.”

According to several band members, practices for the winter concert were held almost daily from the beginning of September to a few hours before the actual show. “I enjoy the concert itself and when there’s this final product we can present to everyone who comes, but it’s the very last few days leading to the concert that I enjoyed,” said orchestra director and music teacher Christopher Lee. “Those are times when I get to see you kids kind of extend yourselves and that’s exciting musically and also mentally, that process is probably more exciting to me then the actual performance itself.”

Freshman and chorus member Hanna Kurdziel stated, “I was definitely excited have a chance to perform with all my friends from chorus. I know that they all worked so hard to sing their best and I think it’s great that they get to be shown off.”

“The time and dedication [the students] put into their performance really shined through,“ said Kelly. “I really enjoyed the concert and I would like to see it again.”