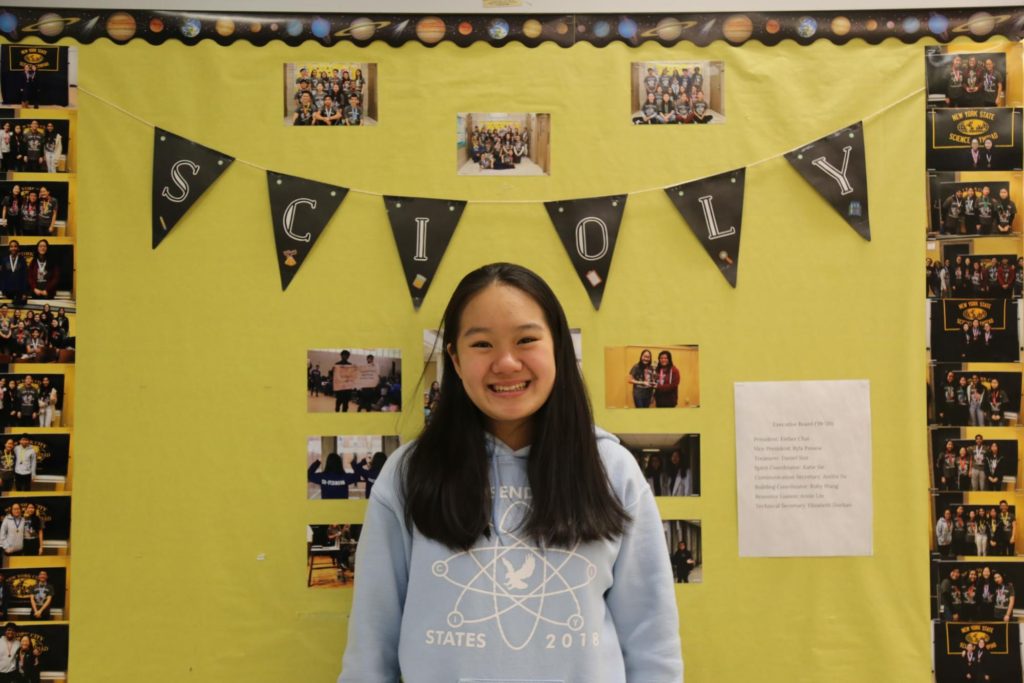 With an insatiable curiosity, senior Esther Chai has never shied away from her inquisitive nature. From an early age, she would ask a myriad of questions related to human health and biology. Each answer would spark another question, commencing a cycle with a continual motivation to learn more about the world around her.

At Townsend Harris, Esther further explored her interests in science by joining Science Olympiad (SciOly), now serving as president. She has competed in a variety of events related to biology, such as Anatomy and Physiology, Disease Detectives, and Designer Genes.

“I loved how Science Olympiad was extremely collaborative. Working with my partners gave me a chance to learn from one another and solve problems together,” Esther stated. She hopes to continue her Science Olympiad journey by joining the Undergraduate Science Olympiad at Harvard University, where she will be attending this fall.

During her sophomore year, Esther took science research as her elective. To work on her independent project, she conducted research at the Memorial Sloan Kettering Cancer Center with their Human Oncology and Pathogenesis Program in the summer of 2018.

There, she studied how a novel breast cancer gene, GREB1, affects the activity of a mutant estrogen receptor that drives cancer activity. The cancer gene had just been recently identified, and thus information regarding its function was rudimentary. Her project aimed to identify the function of GREB1, finding that it works as a coactivator to the estrogen receptor, causing it to form a multiprotein complex by gathering other proteins.

“In the clinical setting, this means that GREB1 is a therapeutic target and scientists can perhaps synthesize drug treatments for patients that target GREB1, thereby reducing cancer growth in patients,” she explained.

When she first started to work on the project, she was “daunted by the lack of knowledge [she] had in this field coupled with the intensity of the research.” She worked in the lab for 45 hours a week, conducting a multitude of tests. The scientific literature she had to read proved difficult in the beginning, but “it was all worth the hard work because I gained so much from the experience,” she said.

“I came across numerous challenges such as messing up experiments,” Esther said. “But they were all chances for me to grow and learn from them. I think that the key to overcoming the challenges in science research stems from passion within an individual. If you want to learn, you’ll do all it takes to achieve your goal because you genuinely love what you’re doing.”

In the summer of 2019, she conducted research through the Garcia Center for Polymers at Engineered Interfaces. There, She studied how titanium dioxide and various extracellular matrix proteins affected the differentiation of dental pulp stem cells. From their research, they concluded that when dental pulp stem cells are cultured in collagen with titanium dioxide, there is an upregulation in osteogenic and odontogenic biomarkers.

“In other words, these cells are likely to differentiate into osteogenic or odontogenic cells,” she elaborated. “This research experience gave me the opportunity to use an interdisciplinary approach in solving biological problems as our project involved coding a 3D printer, using various chemicals, and working with biological products.”

“My advice to those who are interested in pursuing science research whether in high school or in college is to be proactive in seeking opportunities,” said Esther. “There are so many internships available in NYC so take advantage of them! I also want to say that it might seem difficult or complex at first, but if you push through, you will learn so much from the experience!”

Reflecting back on her time in the lab, she related her research experience to her admiration of the nature of science. “When I did research in the lab, after countless tests, discussions, and speculations, I could only propose mere hypothetical scenarios—nothing was ever concrete. But I learned that this is the beauty of science. It’s the ‘maybe’ that pushes me to undertake the next experiment and endless others until I’m just a little bit closer to the answer.”

Throughout her academic career, Esther has accumulated many achievements. Her research has been internationally recognized by the Intel Science and Engineering Fair and the Sigma Xi Scientific Research Society. In addition, she is also proud of her Science Olympiad team’s third place ranking at this year’s Regional Competition.

“Beyond awards, I am extremely grateful for all that Townsend has taught me through these past four years and can’t wait for the next four!” At the moment, Esther plans to pursue a joint concentration in cellular and molecular biology and computer science at Harvard University in the fall.