MET Gala review: Harrisites weigh in on the event’s most talked about outfits 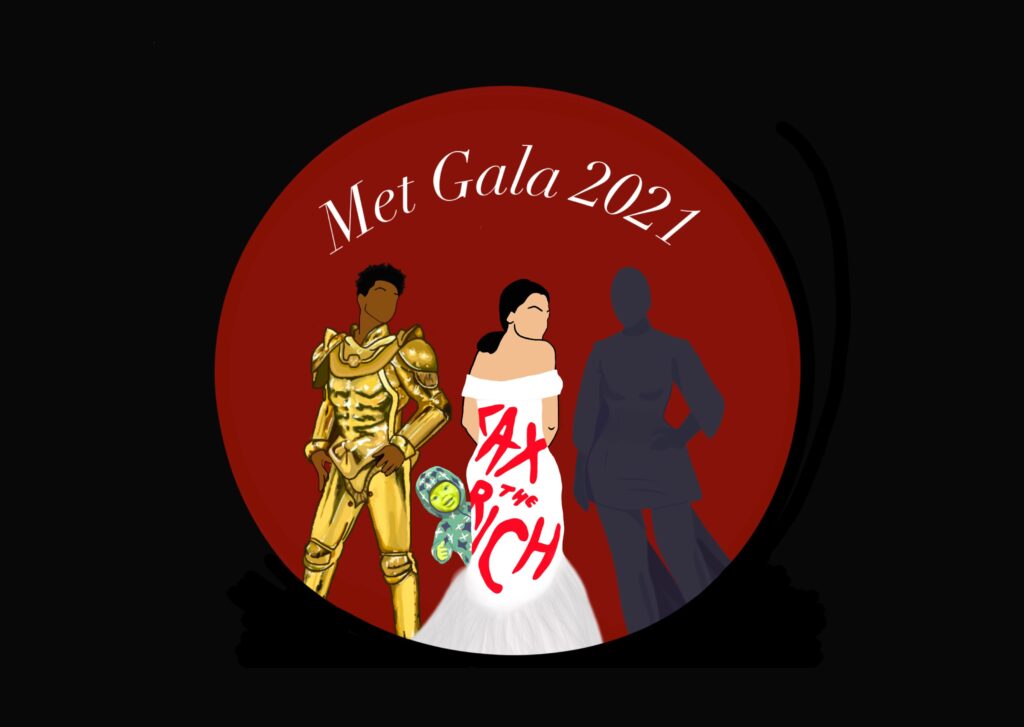 When one thinks of the Met Gala they envision a red carpet, golden attire and sparkles. From A$AP Rocky’s “captain crunch” outfit to Kim Kardashian’s all-black Balenciaga outfit, this year’s Met Gala captured the hard work of famous designers. However, this came with the cost of leaving fans with mixed emotions and asking, “Is this really fashion?”

The Met Gala is an annual fundraiser used to collect funds for the Metropolitan  Museum of Art Costume Institute. For the first time, the gala is broken into two parts  based on the theme of “American independence.” The 2021 Met Gala took place on September 13 for its grand return after the COVID pandemic and the second is set to take place in May 2022.

After the cancelation of the 2020 Met Gala, many fans were filled with hopeful anticipation, wondering what their favorite celebrities would wear to this year’s event. This year, the gala was hosted by four A-list celebrities: poet and activist Amanda Gorman, actor Timothée Chalamet, singer Billie Eilish, and tennis player Naomi Osaka.

The theme of the first part of the gala was “In America: A Lexicon of Fashion.” The theme was woven into the outfits in many different ways, all of which were open to one’s interpretation. For example, Kim Kardashian’s all black outfit left many fans creating memes on the internet with their interpretations of the outfit. Sophomore Emerald Yee found a meme about Kim’s outfit, with Kim Kardashian floating around the Hogwarts Castle as a dementor from the Harry Potter series. Junior Arietta Xylas found the memes amusing, stating that “people are so creative.” Although a theme was set, many viewers, including Arietta, were confused by the outfits presented by the celebrities and their designers. She said, “as an outsider looking in, the theme looked non-existent.”

The Met Gala is a place where the work of various designers come together, ultimately inspiring future fashion trends. However, many of the worn outfits did not meet Harriste’s expectations. Students such as sophomore Andrew Li, labeled the outfits as “clunky and unappealing.” Although Andrew stated that he didn’t view the Met Gala outfits from previous years he hopes that, “the other years were better than this.” Emerald agreed, stating that the gala made her “question what fashion even is.”

Though the outfits at this year’s Met Gala led to lots of disapproval, many fans still marvelled at the myriad of intricate and show-stopping celebrity outfits. Several of the favorite outfits among this year’s gala include gold medalist Sunisa Lee’s all gold outfit that celebrated her Olympic win, as well as Billie Eillish’s blush-colored ball gown outfit, which Emerald stated, “[looked] like one from a fairytale.”

Another celebrity, German singer and songwriter Kim Petra, arrived at her first Met Gala with a Collina Strada dress. The outfit was said to be both “unique and unusual” by sophomore Christelle Diab due to the horse cutout placed on the dress. Along with this, Petra’s hair was styled in a long braid resembling a horse’s tail. Arietta stated that she enjoyed the outfit because of the peculiarity. Similarly, American model and daughter of the late Kobe Bryant, Natalia Bryant, arrived with an environmentally friendly Connor Ives dress. Junior Aissatou Lam expressed that Natalia Bryant’s Connor Ives dress looked like an “easter egg covered in confetti and glitter.” Bryant was among many other celebrities, including Lorde, who showed up to the gala in sustainable fashion.

Although many viewers felt perplexed or unattracted to this year’s gala, Arietta feels optimistic about future fashion. She stated that the fashion trends broadcasted during the Met Gala will ultimately make their way into society, as, “When people see their favorite celebrities doing anything, they tend to adapt it into their own life in one way or another.”