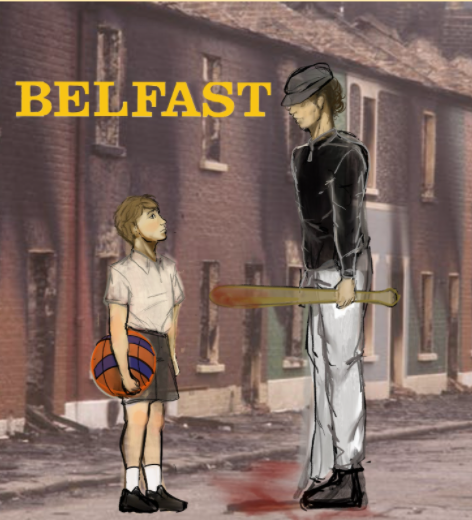 Belfast (2021) is a family drama set during the “Troubles” of Northern Ireland, with a lighthearted aspect that brings a new outlook on the violence. The film’s recount of the Troubles, or the Anti-Catholic riots spanning from the 1960s to 1998, holds modern relevance as a story about protest and bigotry. While sitting in an empty theatre on opening night for the film, I originally wondered why I had come. Yet, as the movie began, I found that the film was more than just a cheesy reminder of my own heritage.

Directed by Kenneth Branagh, this semi-autobiographical tale follows one Protestant family, residing in Belfast in 1969, as they grapple with the prospect of escaping the place they’ve resided in all their lives. Although they are Protestant and thus not the direct target of the violence, they are in danger after the father, “Pa”  (Jamie Dornan), opposes the other local Protestants’ attacks against Catholics. This group includes the Protestant rioter Billy Clanton (Colin Morgan), an old friend who pressures the family and eventually threatens their lives. In the midst of this turmoil, the family must also deal with seemingly never-ending debt, as well as the terminal sickness of “Pop” (Ciarán Hinds). Their only hope is that the children, Buddy (Jude Hill) and Will (Lewis McAskie), are safe to leave Belfast and head to England for good.

The film primarily follows the perspective of Buddy, the youngest member of the family who, through his observant and kind-hearted nature, provides key insights into the struggles of his family as well as life in Belfast.  His naivete shapes the lens through which the events of the Troubles are depicted, with no on-screen deaths and a perspective still grounded in the innocent, small troubles of childhood. In fact, from eavesdropping on conversations to often accidentally ending up in the center of trouble, Buddy’s perspective is quite comprehensive for the angle the film decides to take on.

Buddy also adds much-needed levity to the film through his small-scale troubles and victories as an elementary schoolboy. His crush on the smartest girl in his class and his struggle to get a high grade to get a seat next to her is both sweet and enjoyable to watch. The reveal that the girl is Catholic at the end of the film, though predictable, conveys the unbiased nature of a young perspective. His childish yet understandable reaction to the news of having to move to England is particularly effective given how generally upbeat he is, and speaks for the adults who must contain their sadness. This perspective, however, constrains the narrative of the film in that the viewer is essentially limited to Buddy’s knowledge of events, with only a few scenes occurring where he is absent. The film thus has a great focus on the individual struggle of this Protestant family, rather than a holistic view of the experiences of Catholics living in Belfast.

The other characters are all likeable, though are not always explored in depth due to the scope of the movie’s focus and emphasis on Buddy’s central perspective. Buddy is amusing and endearing, emotionally perceptive, and very well acted. The other standout characters of the family unit besides Buddy himself are the grandparents, with the funny and romantic Pop and the practical but soft-hearted “Granny.” Pop establishes himself strongly in the film due to his prominent influence in Buddy’s life, including his humor and advice. His death from a lung disease, which is heavily foreshadowed, is genuinely saddening though perhaps brushed over as a subplot to the other characters’ rush to escape Belfast. Granny, the only family member who ultimately stays behind, is a wise guiding figure as well as a tragic one given that she cannot bring herself to uproot from her home even while the rest of her family leaves. Ma and Pa are well acted and have good chemistry, but are not particularly noteworthy in their depth of character. Pa and his open-minded and accepting attitude regardless of religion is admirable, but he is clearly a flawed individual given his tension-wrought relationships and his accumulation of debt. Ma has strong emotional depth and embodies a conflict between a desire to endure at home and the need to escape from the violence, one of the overarching narratives in the film. Both parents have strong, emotional performances, especially given how the actors themselves are from Northern Ireland. However, what is strongest overall in the family is the clear love they have for one another, as well as a sense of community and friendship that permeates throughout the relationships in the movie. This reflects both the setting of an Irish small town as well as how greatly family connection matters to these characters.

Billy Clanton, though not strong in his depth, is intimidating and representative of the cause of the Anti-Catholic movement. The narrative itself was engaging, but once it became clear that the movie was generally light-hearted, the tension slightly lessened. Although this element is not necessarily bad, it does to an extent take the focus away from the severity of the larger conflict.

Although the movie is based on real experiences, it generally feels odd to highlight the experiences of Protestants in Belfast rather than the Catholics who were truly being oppressed and attacked. Though the film acknowledges that many were not able to flee or otherwise died in the conflict, our titular characters are able to do so with only some emotional hardship. In telling the story of the Troubles, is it not essential to depict those who were the direct targets of the abuse as well? Though of course there are other films that are more focused on this element, it would have been nice to see more of the Catholic perspective, as the events of Troubles revolved around the oppression of Catholics.

The soundtrack by Van Morrison, consistent with the era the movie is set in, imbues the film with a unique sound including jazz and rock tracks. The music was used effectively to highlight the contrast between Buddy’s upbeat moods and the events of the larger situation in Belfast. There is also the very catchy “Everlasting Love” track.

Done by Haris Zambarloukos, the cinematography is also notable in its emphasis on grounding the viewer in Buddy’s perspective. As the film progresses, Branagh and Zambarloukos’s choice to keep the film in black and white feels simply fitting. The panning shot at the beginning of the film as well as the powerful final image of Granny are effective and expertly done.

On a different note, the film at certain times felt over-the-top and fictionalized. As an example, Pop seemed to die at the most convenient time for the family as to lessen their guilt about leaving. This is further evidenced by the over-the-top wake for him, in which the family seems to celebrate garishly to a nearly uncomfortable extent. Even with the culturally celebratory nature of Irish wakes, this one felt overly joyous. With Pa doing a slightly goofy musical number backed by Belfast villagers on instruments and Ma dancing carefree, the scene has a strange misplaced quality to it. There is also the questionable choice of Ma leading her children back into the store that the rioters are raiding to return something Buddy stole. However, these sillier elements still generally work overall because Buddy’s young perspective affects the presentation of events through his emotions.

Belfast is a strong, personally grounded film that packs energy, comedy, and drama in an explosive combination. All viewers can appreciate this film, though those with an Irish background may notice certain details to a greater extent. The film is important in its depiction of a child’s life during a time of civil unrest, as well as its emphasis on perpetuating acceptance regardless of diversity (such as in creed). Considering the less-conventional perspective of a Protestant but tolerant family in Belfast during the Troubles builds a deeper understanding of the social climate. Viewing this film during a tumultuous political moment charged by bigotry and prejudice makes it absolutely worth your time.