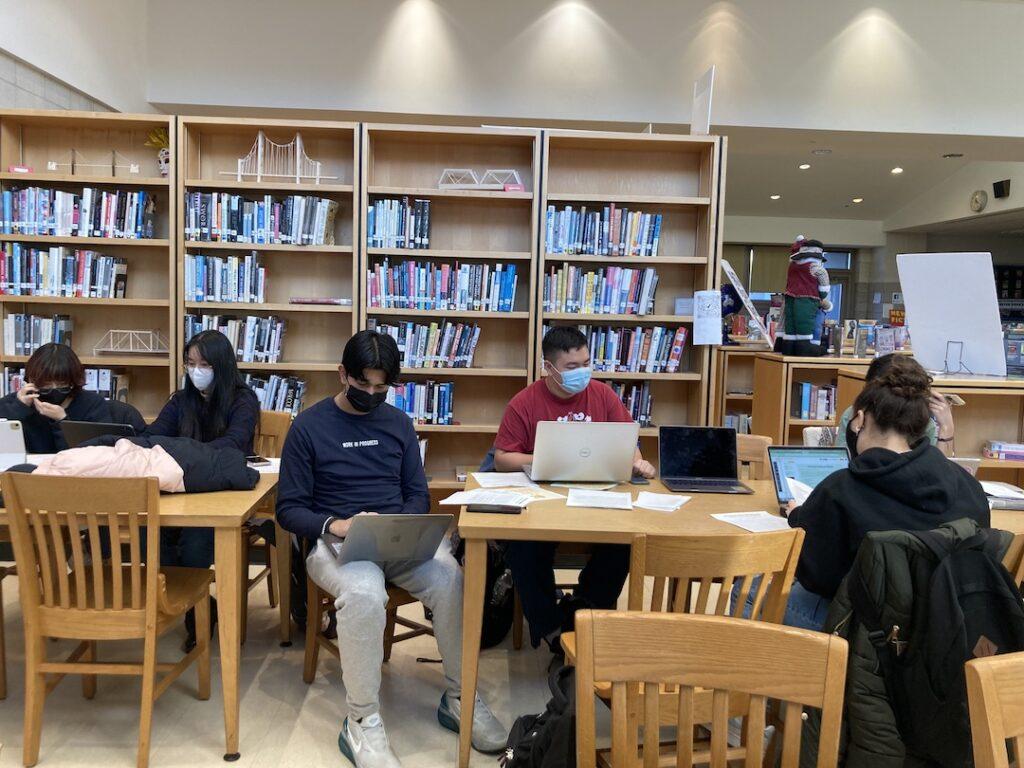 Last Wednesday, Harrisites gathered in the Townsend Harris Library for a phone-banking event aimed at urging politicians to take action in protecting students from educator sexual misconduct. The event was organized by Protect Our Students, the student-run advocacy group that organized the school sit-in event last November. The organization formed after news surfaced that former THHS teacher Joseph Canzoneri was reinstated at THHS this fall despite city special investigators having substantiated sexual misconduct allegations made against him.

“Since the sit-in, we’ve received no response from the DOE and UFT despite continuous efforts to reach out to them, whether this was through email or social media,” Protect Our Students, led by seniors Audrey Chou, Alyssa Figueroa, and Isabella Sicillian, told The Classic. “The radio silence motivated us to take an even more direct approach in contacting the people involved with these institutions to urge them to acknowledge the list of demands we presented to them in November.”

Following the event, The Classic reached out to the UFT and the DOE regarding the demands of Protect Our Students and their claims that they had not received a response from either organization.

On Thursday night, the DOE released a statement to The Classic, pledging to review the protestors’ ideas. “Every student deserves a safe environment free of harassment of any kind to learn in. We applaud these young people [who] are raising their voices on this important issue and we will review their proposals,” DOE Press Secretary Nathaniel Styer said in an email.

The UFT did not respond to requests for comment.

At the phone-bank, attended by fourteen students, volunteers primarily advocated for legislative reform to law 3020a, an education labor protection law concerned with teacher disciplinary hearings. The education law guarantees tenured teachers the right to maintain their position at their prior place of employment unless there is sufficient cause to their termination.

Volunteers, either in-person or remotely, reached out through email, social media, and phone calls to state and city representatives, Department of Education (DOE) offices, and the United Federation of Teachers (UFT) board and borough representatives. Students were given a booklet contact-list and a script as a guideline to their communication.

In a statement to The Classic, the leaders of the advocacy group said the phone-bank volunteers were able to reach multiple offices of politicians. The personnel at Mayor Eric Adam’s office took notes on their requests and comments, they said.

The group also attempted to reach out to UFT offices. “Unfortunately, but not unexpectedly, the UFT refused to speak on the phone with us. The few times we got through to an actual person, they informed us we had to be a teacher to speak with anyone in the organization and disconnected almost immediately after the first call,” Protect Our Students said.

Despite the few number of students at the phone-bank, “those students showed exceptional dedication to enacting a change,” Protect Our Students said.

“I think it’s a good cause, the young people are aiming the message at the right audience. I hope that it is a catalyst to a change,” Principal Brian Condon told The Classic.

“In a system, that system being the Department of Education, that stresses the importance of civics, if I can’t find space and time for kids to exercise their civic muscles about an issue that impacts them directly at their school, then that would mean a lot of the things people say are hollow,” he said.

Senior and Student Union (SU) President Hanna Kurdziel, who attended the phone-banking event, said “I decided to come because I went to the sit-in as well and I wanted to follow up. I think it’s important to contact my representatives, let them know that I’m passionate about this subject and that I hope to see real change in the future.”

In an infographics print-out handed to volunteers, Protect Our Students outlined their proposed amendments to law 3020-a, including that victims should not be compelled to testify in front of the alleged offender in disciplinary trials and that the law explicitly include as a valid excuse of termination “any sexual/romantic relationships between a student and teacher up to 5 years after graduation.”

The phone-bank additionally advocated for an extension to the law’s statute of limitations which sets a limited three-year time frame for a student to file a report from the time the alleged misconduct transpired. “Healing and processing take time,” the print-out further stated.

Many students expressed the motivation to effectuate legislative change through civic engagement, a chief reason for their attendance. For senior Lisa Felson, the event meant being a part of an effort to prevent teachers with substantiated sexual misconduct allegations from being able to retain their jobs, but if similar situations such as Mr. Canzoneri’s reinstatement at THHS were to occur she also wanted to ensure that “there are proper procedures set in place to protect students.”

“I came to this event to hopefully cause some reform in our laws today,” junior Ryan Hussain said. “Today we are at this phone-banking event to hopefully get in contact with the officials that are a part of the DOE, UFT, and the elected candidates that are supposed to be doing this for us.”

“I decided to come because I knew that this was definitely an important issue that needs to be addressed and the more pressure we put on leaders and the DOE, the more change can possibly be implemented,” senior Angelina Kretz said.

“Applying pressure on local politicians to acknowledge the issue and the concerns of their constituents, in this case, the students of the NYC school system, is an essential next step,” Protect Our Students told The Classic.

Discussing her phone-banking experience, Angelina said, “I’ve tried contacting the Department of Education and the UFT. Unfortunately, I just got directed to people that didn’t really help upon this issue but even though that was a little bit discouraging, I will still continue making calls and still try to call elected officials so they hopefully make change on this issue.”

In their statement, the leaders of Protect Our Students explained other avenues of action they plan on pursuing, including holding meetings to brainstorm ideas for their movement in conjunction with the student body, a pin campaign, and extending outreach efforts to underclassmen. “We do want to continue holding similar events in the future. Even with low attendance, having a dedicated and tight-knit group participating in weekly or bi-weekly phone banks will allow us to continuously put pressure on those ignoring our pleas,” they said.