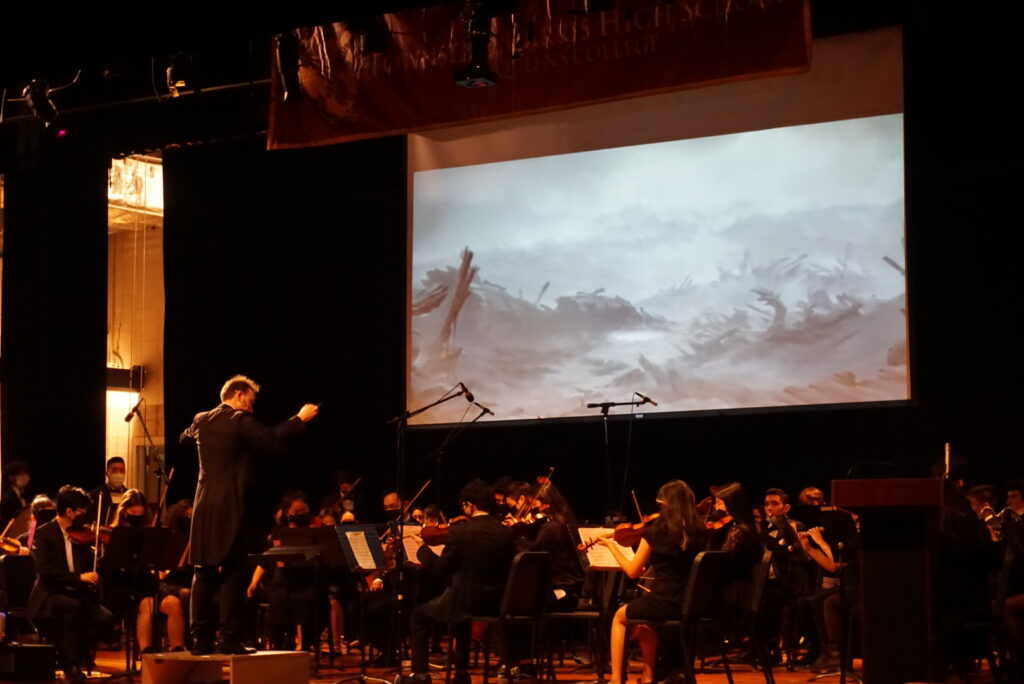 Since the reopening of Townsend Harris High School in 1984, the music department has allowed students to expand their creative talents through the musical medium. As conductor of the Jazz Band, Concert Band, and Wind Ensemble, as well as the creator of the Modern Band and Music Technology classes, music teacher Kevin Heathwood aims to expand the music department and make it a prosperous atmosphere for THHS students to both hone their skills and feel at home.

With a teaching history spanning 12 years, Mr. Heathwood spent most of his career at MS 180, a middle school in the Bronx. Once he received the opportunity to teach at THHS, he immediately sought out to improve its music program and bring more advanced music education to its students. “When you have students as amazing as the ones at Townsend, the sky’s the limit. I then sought to build up the music program to match the national recognition [of] the other academic departments,” he said. The Classic spoke to Mr. Heathwood about his personal thoughts and goals in regards to the music department at THHS.

What drew you to teach music at THHS?

I heard about the position here at Townsend through a posting I saw on the NYSSMA website and when I was reading up on the school I saw how amazing it was academically, but I did not see much about its music program. My goal is to not only enrich the students of Townsend with high quality music education, but also to attract great musicians from middle schools to come here and build a reputation for the school so that when people hear Townsend, they go: “the place with the awesome music program.”

What are some overall recent improvements or unique traits you have noticed about the music program THHS offers?

During my first year [at THHS] there were four types of music classes a student could join: Vocal, Piano, Orchestra, or Band. Today, there are six, with two new classes being added: Modern Band and Music Technology. With more types [of] classes being added, it not only involves more people in the music department, but it gives an aspiring rock musician, singing-songwriter, or music producer – who maybe wouldn’t feel at home in chorus, piano, orchestra or band – a place to shine. Furthermore, we have added a student pit orchestra for the spring musical, seen a dramatic increase of students registering for the NYSSMA Solo Festival, brought our ensembles to NYSSMA Majors for the first time since the 1990’s, [and] incorporated student conductors at performances. This year Townsend has currently 15 students selected for the NYC Honors Music Festival. That number could increase as more selections are being made this week.

What improvements have you made or are looking forward to making with each class you teach?

For the Concert Band, Wind Ensemble, and Jazz Ensemble I’m looking to grow the numbers, raise the level of playing, while instilling a culture of excellence. For Modern Band I want to see where this crazy road takes us. It’s the first year in person with this new program and I’m still ironing out the wrinkles, but I want to give our guitar players a place to perform and learn more about music. For Music Technology I want to incorporate the AP Music Theory curriculum with the music production side, and officially bring back AP Music Theory to Townsend, but from a more modern and culturally applicable approach.

Your modern band class’ performance Fridays have been something many students enjoy. What was your idea or inspiration behind this and what else are you looking forward to for the Modern Band class?

Music is a performance art, and performing itself is a discipline that requires practice. Performing can be a scary thing for an aspiring musician, so what I aimed to do was provide a safe space for students to gain some experience performing so that the more they do it, the more comfortable they get being on stage. It also serves as a workshop to help student performers to work out ideas and songs they’re working on. Having an audience to try out new material on is a luxury not often found, and being able to give this platform to such talented student musicians has been wonderful to see.

If you were to imagine the Townsend Harris music program in ten years, what would you hope to see different or the same?

It’s not so much of things I’d like to see different but I’d like to see the progress that we’ve made in just these first four years of my tenure continue over the next ten years and beyond. I don’t know how one would measure success, but some indicators would be having our top groups performing at a NYSSMA level VI (the highest level there is), top groups going on national/international tours, having a student leadership system that runs the entire music program from top to bottom, while I merely use my expertise to guide, facilitate, and make music classes more accessible to keep music in students’ schedules.