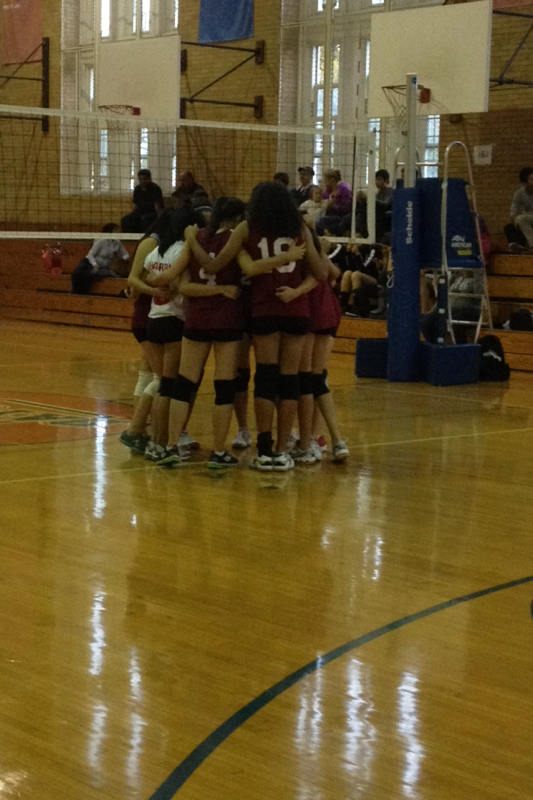 In both sets the girls were up by at least 5 points and gave it up.  In the first set, the girls were up 13-9 and had all the momentum but then gave up to a Bayside comeback.  This also happened in the second set when the Lady Hawks were up 6-0 at the start, gave up the lead but would hold on to the lead when the score became 22-21.  But the girls didn’t crack under the pressure and held it together winning both sets by scores of 25-21 and 25-23.

In his first game as coach of the Hawks, Coach Weinstein was “thrilled to death.  The girls played spectacular volleyball, played as a team and incredibly.”

This huge win over a favored team was a team effort with tons of long volleys, showing heart, hustle and determination.  Junior Lucy Lim described the win as “refreshing because we were the underdog of the game and we proved them wrong.”

Senior Selina Feng added that the victory “was great because they were one of the most competitive opponents in our division.”

A huge piece in this win was sophomore middle blocker Leann Senat, who had 3 kills in the first set.  She also made many blocks including 4 consecutive blocks in one long volley, helping Townsend Harris win a point.

In reaction to this performance Leann said she is “proud of the team in how we could pull it together and showed we can compete in the PSAL.”