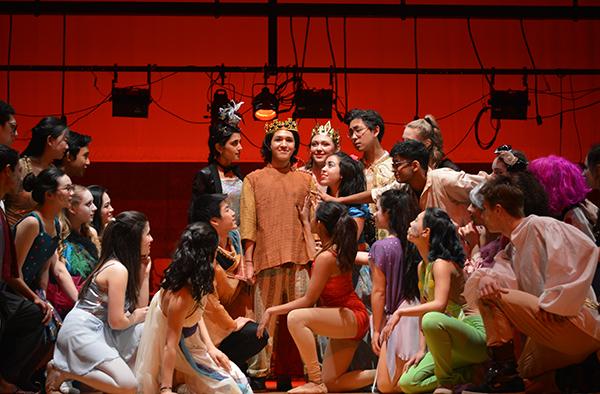 With a whimsical circus-themed backdrop and a boy’s overwhelming desire to be extraordinary, Pippin took the stage in Townsend Harris’s annual spring production. A reproduction of the Broadway classic from 1972, this year’s school play took a sharp turn from last year’s lighthearted production of Pippin, as it dealt with far more serious themes while still maintaining comedic qualities.

The story begins with a young prince by the name of Pippin (sophomore Noah Sadik), who returns to the kingdom of his father, Charlemagne (junior William Mun) in the hopes of discovering something meaningful to fill his life. His journey for significance leads him to try several different lifestyles, from soldier to womanizer, king to artist, and preacher. He is unable to find happiness in any of his pursuits, until a widowed farm-owner named Catherine (junior Maria Silaban) and her son Theo (junior Leo Rodriguez) take him into their relatively simple lives. Fear of an ordinary life eventually drives him away, and despair pushes him towards the ultimate “finale.”

In the end, however, he realizes that happiness can be found within the simple things in life, and returns to spend his life with Catherine and Theo.

Director and English teacher Joseph Canzoneri contemplates the more serious nature of this year’s play, saying, “The major theme is a young person’s quest to fill his life with meaning. It’s something everyone can relate to because we’re all trying to find our place in the world.”

Junior Leo Rodriguez further elaborated on the ideas behind the play, stating that “Pippin does a great job at exploring ideas and fears we all have, like not being able to meet expectations, finding what makes someone special, and wanting to stray from what’s just ordinary.”

In spite of the deep ideas touched on by this year’s play, humor remained an integral part of the performance, with senior Sarah Defilippo expressing her belief that “the humor was the most unique part of the play…the jokes were incredibly engaging, and their executions were perfect.”

A large part of this unique humor throughout the play must be attributed to the overwhelming number of sexual innuendos, mainly stemming from King Charlemagne and Pippin, both relatively licentious characters.

Junior Daniell Morales added, “What makes this play unique is the fact that it is the first one with a direct sex scene,” showing the success of a risky move in the name of plot development and comedy.

However, senior Elina Niyazov, who stars as the Leading Player, points out the important difference between the type of humor used in this year’s and last year’s play. “This year’s play has deeper meaning, it’s more of a high comedy, compared to last year’s knee-slap comedy [Legally Blonde].” She also addresses the relative mystery behind this year’s play, saying, “People were more aware of what Legally Blonde was about, unlike Pippin.”

Clearly, the general lack of knowledge of this year’s play did not take away from the audience’s enjoyment of everything it had to offer. Junior Keefa Lovelace liked “how [the performers] incorporated the humor with the acting and the singing.”

Freshman Jacqui Valenti thought “[the performers] had really great costume design, and the acting was excellent.”

Daniell, who played Professor Callahan in last year’s Legally Blonde, expressed great nostalgia over watching Pippin as an audience member. “I can still recall the feelings from my times in the play. The pressure, nerves, and all eyes on you, yet no one seemed affected. Everything went flawlessly,” he said.

Behind this “flawless” show were the countless hours of hard work and dedication by the cast, crew, and directors. Director Rich Louis-Pierre said, “The hardest part of putting any play together is putting all the pieces together. You have to deal with the musical component, the technical component, and all these parts start coming together towards the end.”Mr. Canzoneri emphasized the difficulties of having performers with conflicting schedules, saying, “The hardest part of putting the play together is getting everyone to come to rehearsal. We have a cast of 27, and we still haven’t had the entire cast together.”

Some performers cited the rigorous songs and dances as a challenge they had to overcome, while others found their character roles to be difficult to master. Junior William Mun belongs to the latter group, as he believed “emanating the character’s personality was very difficult [for me],” though he was able to get past this with help from Mr. Canzoneri, as well as some in-depth analysis of his lines. Noah, on the other hand, said, “The most difficult part is the songs and dances that I have, just because I have a lot high notes that I have to sustain for a long period of time, and the dances are all pretty complex.”

Even with these obstacles and difficulties in creating the play, no one in the cast or crew expressed a single regret about their work over the past few months. Senior Fahim Nousad, who played the Baron and the Peasant, believed that the experience of dancing and singing with everyone on stage “helped bring all of [them] closer together in [their] friendships.”

Leo stated, “What makes the play worth it is seeing your hard work come to life. Whatever your part is, no matter how big or small, it really shows when you put all your passion into it.”

Mr. Louis-Pierre summed up his take on the play, stating that “it gives students a skill set that cannot be learned in a classroom…Socially, it gives everyone a sense of belonging. You become part of a group working towards the same goal.”

Elina, reflecting on her experience in the past four years of THHS productions, stated, “Towards the end, you start learning the meaning behind the character, and you realize that it’s more than just a play.”