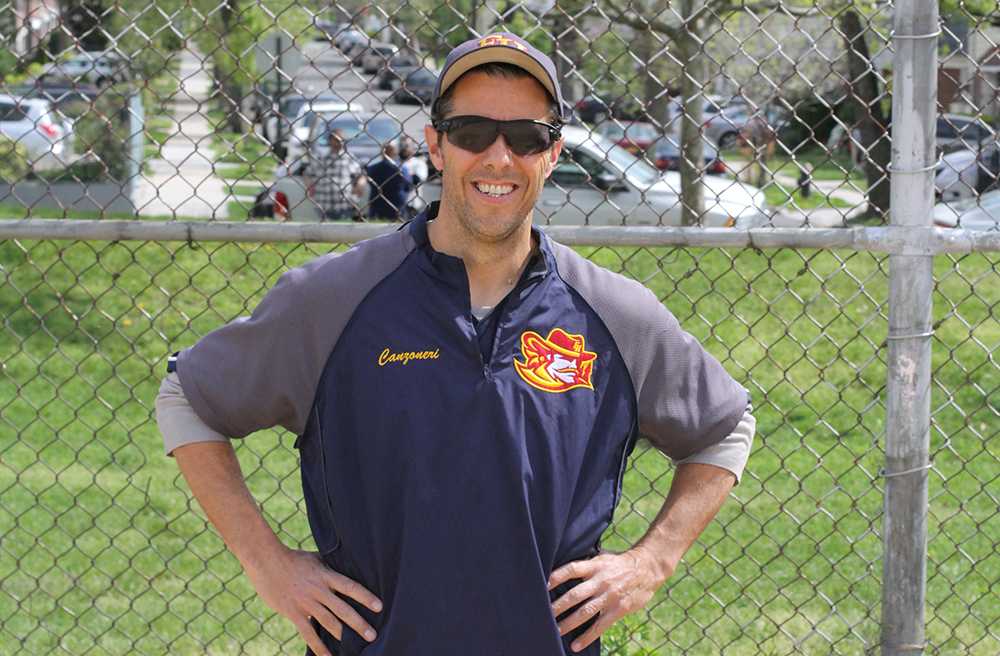 Since the publication of this article, Mr. Canzoneri was removed from Townsend Harris following allegations of sexual misconduct. Some advised that we take down this article, but since the below perspectives might be an important artifact for anyone in the future wanting to research what happened at THHS, we have decided to leave the article up with this disclaimer. You can read about the allegations that came to light and the fallout from them here and here.

The long-awaited matchup between Townsend Harris and Forest Hills pit the Hawks against one of Townsend’s very own faculty members, English teacher Joseph Canzoneri, head coach of the Rangers.  A two game set, both teams won their respective home games, with the Hawks winning the first game 6-1 and the Rangers taking the second 5-3.

Junior Alex Lebeau tossed a gem at Kissena Park in the first game, pitching a complete game and stymieing the Rangers offense, limiting them to just one run. While the Hawks were unable to sweep the Rangers, losing at PALS Oval,  Alex relished the chance to play against one of his own teachers. “To play against Mr. Canzoneri was actually lots of fun,” he stated. “To see him at the field all pumped up and ready to go definitely gives you an extra incentive to go all out.“

On playing against THHS and some of his current and former students, Mr. Canzoneri said, “It’s fun. I’m a competitive guy, I don’t like to lose, but at the same time, you try to be a gentleman about things. It’s always good to see athletes competing and succeeding.”

Baseball has always been a significant part of Mr. Canzoneri’s life.  He played competitively from the second grade until he was 19, in various Little Leagues, CYO leagues, travel teams, as well as St. Francis Prep’s junior varsity team. “I’m left handed, so I always pitched and played first base,” he explained. “I didn’t really have a great glove defensively, [but I had a] decent bat, more like a profile #2 hitter with decent power. [I could] spray the ball around, walk, bunt, hit and run,” he said.

Mr. Canzoneri, in part, was influenced to play by Yankee legends such as Thurman Munson and Reggie Jackson. “I was a kid for much of the great Yankee teams of the late 70s…I remember taking the train to Yankee Stadium, even though the Mets were right here in Queens. Believe it or not, when I play lotto, which is pretty rare, the six numbers I’ll pick will be the jersey numbers of the first six Yankees from those teams.”

Although his playing career never took off, Mr. Canzoneri’s coaching career began serendipitously.  An unexpected vacancy in the Forest Hills’ varsity baseball coaching job led him to take on the position while he was an English teacher at the school.  The rest, they say, is history. When his twin sons became old enough to play baseball, he gave up high school coaching to coach Little League baseball. Nearly two decades of almost year-round coaching later, Mr. Canzoneri is energetic as ever, and back coaching at Forest Hills, where he led the team to a 14-2 record in the regular season and the PSAL Varsity A Division championship last year.  “[My sons] would legitimately play 60 to 70 games a year between Little League teams, travel teams, summer ball, and fall ball,” he described. “And it’s something that I love. I’m happy in a theater in the wintertime, working on a show, and I’m very happy being on a baseball field [the rest of the year.]”

Senior Mason Rivero, who won several district championships playing on a travel team coached by Mr. Canzoneri, praised his spirited coaching style. “As a coach, he knows how to get to know you off the field, and at the same time, motivate you while you’re on it. The number one thing he could always do is give you the confidence boost you needed.”  Mason also attributes much of his current success as an athlete to Mr. Canzoneri.  “I owe everything to him for giving me that chance [to play on his team] and fueling my passion for the game,” he expressed.

Alex, one of Mr. Canzoneri’s AP English Literature students, noted Mr. Canzoneri’s similarities on and off the field. “He’s very upbeat, serious when he needs to be and always focused on what’s at hand. [Baseball] is something he’s very passionate about.” On top of coaching baseball, Mr. Canzoneri is also an avid participant in fantasy baseball and known for occasionally incorporating baseball into his lessons, notably in his teaching of F. Scott Fitzgerald’s classic, The Great Gatsby.

And as for why he does not coach Townsend’s baseball team, Mr. Canzoneri cited his involvement in the school play. “To do both [coaching and directing] at one time really is a pain in the neck,” he exclaimed.

While Mr. Canzoneri no longer plays baseball, he certainly plans to continue coaching it, even after his retirement from teaching. “[While] I don’t think a retiree should be someone to direct the school play, I’m trying to weigh my options for down the road, [and] coaching is absolutely a yes.”

Here’s to further analysis of Meyer Wolfsheim and the Black Sox Scandal, fiery fits on the stage and on the baseball diamond, and perhaps a future production of Take Me Out—once more male students join the school play, of course.