Meet the Candidates for the 2016 Election Simulation 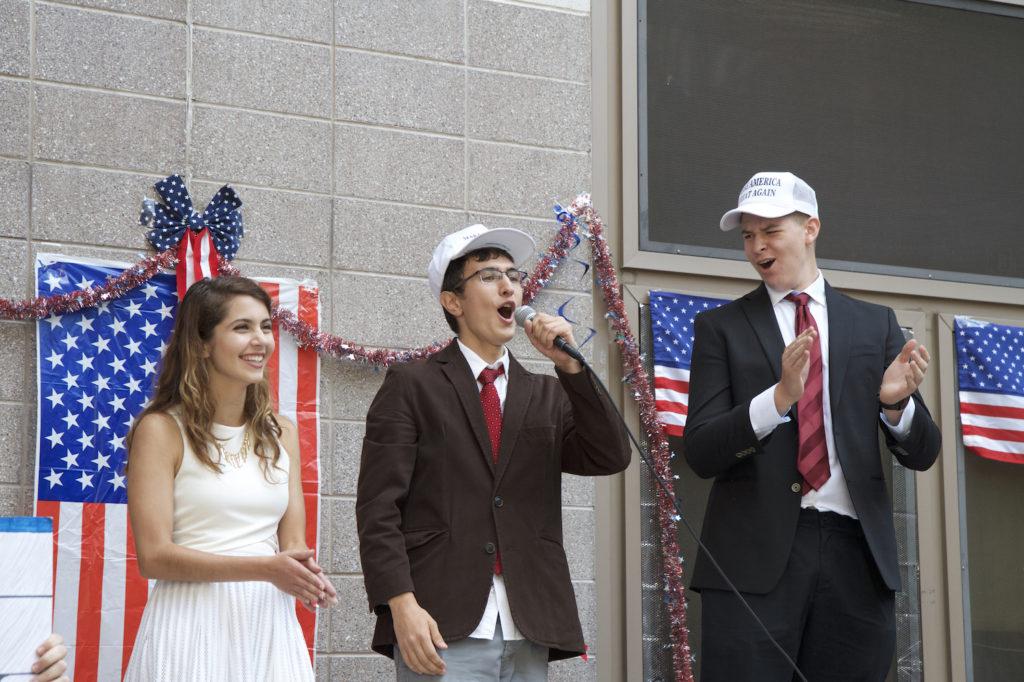 Last week, senior social studies classes selected the performers for all four presidential candidates in what may turn out to be one of the most closely watched Election Simulations in Townsend Harris history.

All eyes will be on senior Daniel Khaldarov as he steps into the role of Donald Trump, the businessman-turned-politician who has turned the political world upside down with his controversial campaign.

On receiving the role Daniel said, “I was nominated to play [Trump]. I think it’s going to be a really fun election, probably the most fun in a long time. To put it bluntly, [playing my candidate], I’m going to wipe the floor with the other candidates.”

Misbah Pochi will be playing Hillary Clinton: “I volunteered to be Hilary because I thought it would be a good experience and seeing how the previous candidates had impacted me and involved me so much, I wanted to be able to do the same thing my senior year. My campaign team and I having been working hard to make the kick off rally a success and hard work always pays off.”

She continued, “I believe my campaign team and I will work tirelessly to get the love and support of the school and use that to help us, we believe more in the effort we put in and want to work more for the understanding of the students rather than a win or lose.”

Though Hillary Clinton won last year’s Election Simulation against Bernie Sanders, her win came largely before the Sanders campaign hit it so big with young voters across the nation. With many of Sanders’s young voters in the real world opting for a third party candidate, it’s possible that this year’s Green party and Libertarian candidates could have better chances than their real life counterparts.

On playing Green Party nominee Jill Stein, senior Raya Kazdan remarked, “I find politics very interesting, and I think Jill has a platform more THHS students should be aware of. I thought this would be a fun challenge, and other than the stress of having so many other extracurriculars at the same time,  I’m excited to take it on. I love my team; they’re so supportive and helpful every step of the way. I think we work together really well and they make it a lot easier to prepare because it’s truly a group effort.”

She continued,  “I think it should be a really interesting simulation, considering how crazy the real election is. I’m excited that third party voices like Jill Stein and Gary Johnson, who get barely any national recognition, will get actual recognition at THHS.”

Nicholas Doss-Hom, who will be playing Libertarian nominee Gary Johnson said, “I was nominated to play Johnson. I [think] being an underdog is a little exciting because I may surprise some people. [For example], Dr. Steinmann thinks I have a good shot at winning; so I’m excited to see if I can make the election.”

If the students are eager to get going with their campaigns, the adults overseeing everything may be feeling a little more cautious than in previous years, given the volatility of the topics raised in the real campaign.

On the possibility for more drama than usual, Assistant Principal of the Humanities Department Rafal Olechowski commented, “I really love the election simulation at THHS. I am most excited to see our students forget that they are in school and in difficult classes for a second. Having the election simulation really makes the school a very enjoyable experience for all the students.”

Students seemed excited by the possibilities. Junior Alicia Balchand said, “I am very excited to see what happens this year in the election simulation. Last year, we got a taste of the possible presidential candidates but this year, as the real election happens side to side with the THHS one, I am excited to see if the results match.”